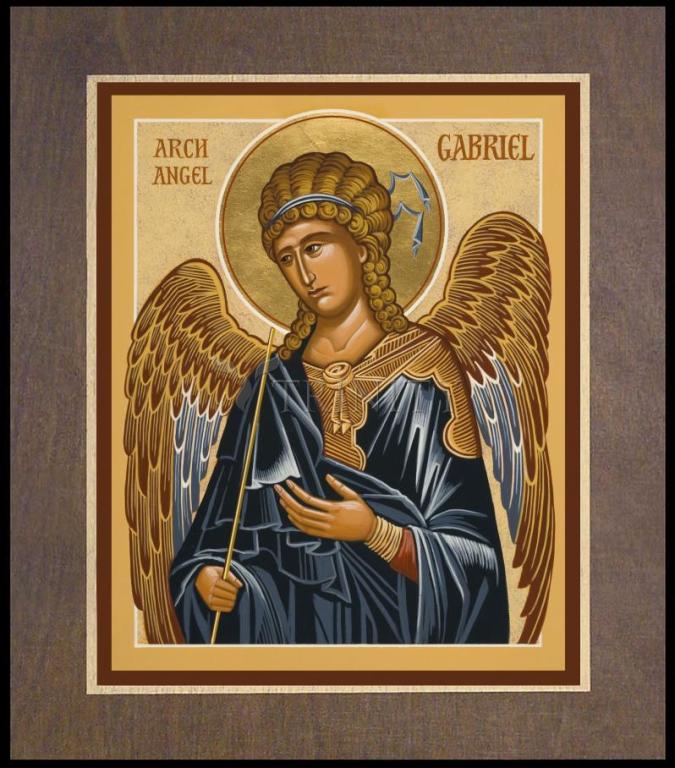 The word angel is from the Greek “aggeslos,” and means “messenger.”
St. Gabriel is one of seven archangels who enter and serve before the Glory of the Lord, and one of the three archangels mentioned in Sacred Scripture: Michael (Revelation 12:7-9), Raphael (Tobit 12:15), and Gabriel (Luke 1:27-28).

The name Gabriel means “Man of God” in Hebrew or “God has shown might.”  He is often depicted with a spear in his right hand and a mirror of jasper with an X (the first letter of the word Christ in Greek) in his left hand.  The mirror signifies the wisdom of God as a hidden mystery.

According to Sacred Scripture, the archangel Gabriel is the messenger angel who appeared to people in the Old Testament and the New Testament on many different occasions.  In some appearances, Gabriel is mentioned by name.  On other occasions, Gabriel is thought to be the unnamed angel who appeared and made announcements to Moses, to Saints Joachim and Anne, to the shepherds at Jesus’ birth, to the myrrh bearing women approaching Jesus’ tomb, and to Jesus in the Garden of Gethsemane to strengthen him.  It is said that: Gabriel taught the Prophet Moses in the wilderness in order to write the Book of Genesis. He revealed the coming of the Savior to the Prophet Daniel (Daniel 8:15-26 and 9:21-27.)
He revealed to Saints Joachim and Anne the conception of the Virgin Mary. He appeared to Zachariah to announce the birth of St. John the Baptist.  (Luke 1:10-20)

In Gabriel’s best known and most celebrated appearance, he announced to Mary that she would bear a son, who would be conceived of the Holy Spirit, and would be called Son of the Most High, and Savior of the World.   (Luke 1:26-38) Gabriel may have been the unnamed angel, who appeared to St. Joseph in his sleep and instructed Joseph not to divorce Mary quietly.  He explained that Mary’s child was conceived by the power of the Holy Spirit and that He would be named Emmanuel, which means God is with us.  (Matthew 1:20-24)

Gabriel may have been the young man that Mark described who was seated in Jesus’ tomb and who also appeared to the myrrh-bearing women intending to anoint the body of Jesus. Mark said, “The young man clothed in a white robe told the women. ‘Do not be amazed!  You seek Jesus of Nazareth, the crucified.  He has been raised; he is not here.  Behold, the place where they laid him.  But go and tell his disciples and Peter, he is going before you into Galilee; there you will see him, as he told you.’ ’’ (Mark 16:5-7)

Feast Day:  The feast of St. Gabriel was included in the Roman calendar in 1921, for celebration on March 24, the day before the Feast of the Annunciation.  In l969, the feast day for St. Gabriel the Archangel was changed to September 29 for a combined celebration with the Archangels Michael and Raphael.